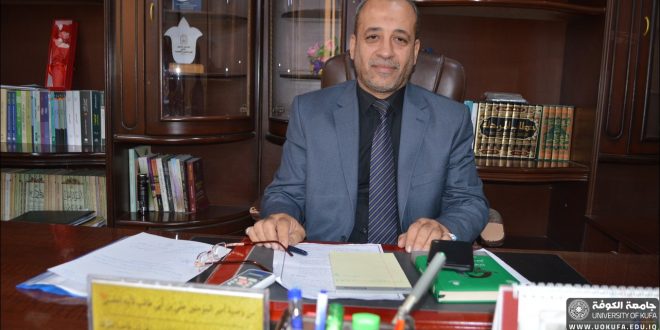 Dean of the Faculty of Education
The College of Education is one of the future colleges that has contributed actively to the nurturing of the educational cognitive mind and the graduation of those who have the ability and the ability to teach in the fields of education at the level of Najaf province in particular and our dear country in general.
The College of Education seeks to implement the strategic visions derived from the Quranic verse:
In the name of God the Most Gracious the Most Merciful. But be Rabbanites, as you know the Book and what you were studying (79) (Al Imran
From this, the College of Education has always been a believer in this Quranic verse to the gathering of education in the minds of the students, and they have the love of belonging to the University and the country and the sanctity that has poured over this blessed land for the existence of the shrine of the faithful. From the Kufa Glory taken by the Commander of the Faithful Ali (PBUH) on 12 Rajab in 36 AH as his capital. His great university, Imam Jaafar ibn Muhammad al-Sadiq (AS), extended the narrator’s saying: I realized in this mosque – the mosque of Kufa – Ibn Muhammad al-Sadiq (p) refers to a large number of students M and knowledge. Until the development of the Great School Sheikh Abu Ja’far Muhammad ibn al-Hasan al-Tusi (d 460H), which is still in the hands of the flag and the lesson and the youth to the day of the people, from this and that the Deanship of the Faculty of Education sought to start from these ideas and visions to crystallize curricula that provide scientific and educational knowledge applied The visions of the University of Kufa glue goals, mission and instructions.
The College intends to provide creativity and original research in the various arts of knowledge and science. Developing scientific research methodology and nurturing a promising generation that adopts sound educational ideas. Based on what we have mentioned from the philosophy of education taking into account the cognitive, psychological, social and philosophical.
And the God of the intent behind

Dean of the Faculty of Mixed Education / University of Kufa