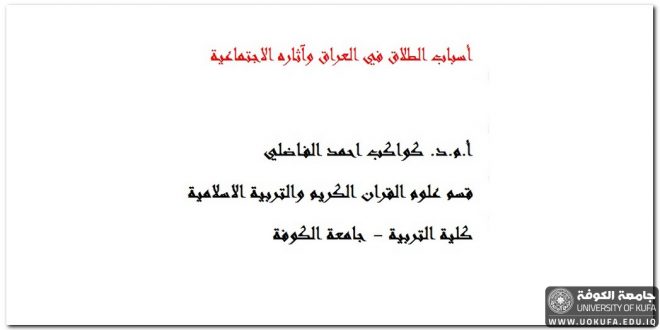 Causes of divorce in Iraq and its social effects

Causes of divorce in Iraq and its social effects

The reasons leading to an increase in divorce cases in Iraq
The change that occurred in the Iraqi reality led to women entering an important element in amending a large number of symbols of important social equations, including:
1- The increased opportunity for women in education and their eagerness to learn
2- The existence of a state and law that believes in human rights and defends it and women’s rights clearly
3- Claiming economic and political rights and defending these rights internationally
4- Civil society institutions demanding women’s rights and opposing all forms of violence and discrimination against them, and demanding the implementation of international treaties and agreements, the most important of which is the CEDAW Convention against Discrimination against Women.
5 – Obtaining advanced positions in science and work, and certifying their efficiency, and obtaining fixed financial resources every month, sometimes more than the husband’s resources.
6- Getting continuous support and developing her family and work skills
All of this, in turn, removed the woman from her subordination to the man through achieving herself economically and financially autonomous, so the woman often became the one who spends more on her family than the husband, which makes her acceptance of the issue of guardianship and guardianship of her children subject to raising her questions that come out either spontaneously or through Whoever raises her with her, the wife no longer accepts the husband as it was previously, then after she was an obedient follower, she became an active partner, and therefore, ceding to the husband is no longer one of the ideas that a woman believes in or succumbs to her simplicity in order to live in the confines of a man who gives her protection and provides her with livelihoods, as protection has become present Awareness Well-off can provide work and earn her hand without discomfort.
These reasons if we contemplate them, we will find in them an answer to a question that is being asked a lot, which is: Why have divorces increased in Iraq in recent years despite the improvement of the economic situation, which was the largest and most important cause of divorce in Iraq?

The social effects of divorce
The issue of divorce is generally characterized by bad social effects, and accordingly, the greater the divorce rate, the greater disintegration of society and the descent of women and children to society who suffer from psychological and social problems that lead later to the appearance of sin and the increase in the perpetrators and the diversity of its forms, quite the opposite of if the families were sympathetic, sympathetic, sympathetic and compassionate .
Therefore, the Imami jurists were keen to make conditions for divorce and eased the conditions of marriage to try to reduce the phenomenon of divorce in society, so the front jurisprudence required:
A- The presence of justice witnesses to conduct the divorce form, if there are no justice witnesses, then there is no effect of that divorce, and the relationship of the family remains the same. Of course, the presence of justice witnesses is difficult to provide. He has time to reconcile, and most believers avoid attending the divorce process testimony, which is the most hateful for God. Also, the presence of the believers (witnesses of justice) will be a reason for reconciliation since they are just believers who will not accept the disintegration of a family and will try to reconcile, God willing .. The most important condition in front divorce is, as we believe, a first obstacle Mam husband to divorce his wife and his partner ..
B – That the wife be pure from menstruation .. If she is in a menstruation state then there is no effect of the word divorce and the family relationship remains. This is a second obstacle that gives the husband enough time to think and reconcile until the woman has been cleansed .. In addition to that if the woman is pure then the marital relationship Nationality is appropriate and desirable, perhaps the husband changed his decision and things returned to their tracks .. But if the woman is menstruating then the husband’s alienation is stronger in addition to his anger, and this helps to happen (the most hated by God) and the disintegration of the family .. And accordingly, the purity of the woman is another obstacle to The husband takes the decision to demolish the family.
A – As required by the Imami Shiites in the absolute: puberty, reason, and choice, it is not correct to divorce the boy or the divorce of the insane nor the divorce of the compelled to divorce, yes it is possible the validity of the divorce of the ten-year-old boy, then care must be taken in it.
D – and that the divorced woman really means separation in the form of divorce, so it is not valid for a humiliating divorce, a Sahi, and who does not understand the meaning of divorce.
About such conditions make many cases of divorce not happen because the conditions are not fulfilled because problems usually occur between the spouses alone or between their young children, or it is not intended to pronounce divorce or other conditions.
As for the divorce of the three, we find that the Imami also see that the divorce of the three as in the form found among the jurists of the schools of thought is considered as having only one effect.
Therefore, we must stand against the cases of divorce that are widespread in all parts of Iraq in all of our provinces and a simple visit to our courts. We are provided with statistics of the large numbers and the staggering facts about divorce rates in society.
Divorce leaves many aspects of factors that encourage sin, and among these are:
1- A family disintegrated and ended socially
2- Broken and battered women
3- Some women do not have a breadwinner, which means that some of them resort to making a living in easy ways that depend on the woman’s femininity or her beauty
4- Sometimes women are without a breadwinner, so they resort to the easiest means to obtain money
5- Men who lose their confidence in women, leaving their psychological problems stuck and may not succeed in building new families based on love, understanding and mutual trust.
6- Children begging tenderness from the mother’s relatives or the relatives of the father, and when they do not find what they are looking for, they have psychological and social diseases, they lose the desire for peaceful coexistence with the other because the one who is missing something does not give it.
7- Children looking for safety outside the home, so they will be a center for attracting drug pushers and smoking at an early age, and fleeing from their homes to the arms of sin and crime.
8- Hostility and hatred between families who were linked by mutual respect and the desire to fuse, and the situation may amount to fighting and committing some crimes for which innocent people go to prison.
إرسال تعليقات
السجلّ
تم الحفظ
المنتدى

Tags #Causes of divorce in Iraq and its social effects #Prof. Kwakib of Ahmed al-Fadhli 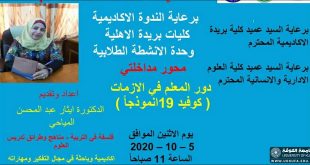